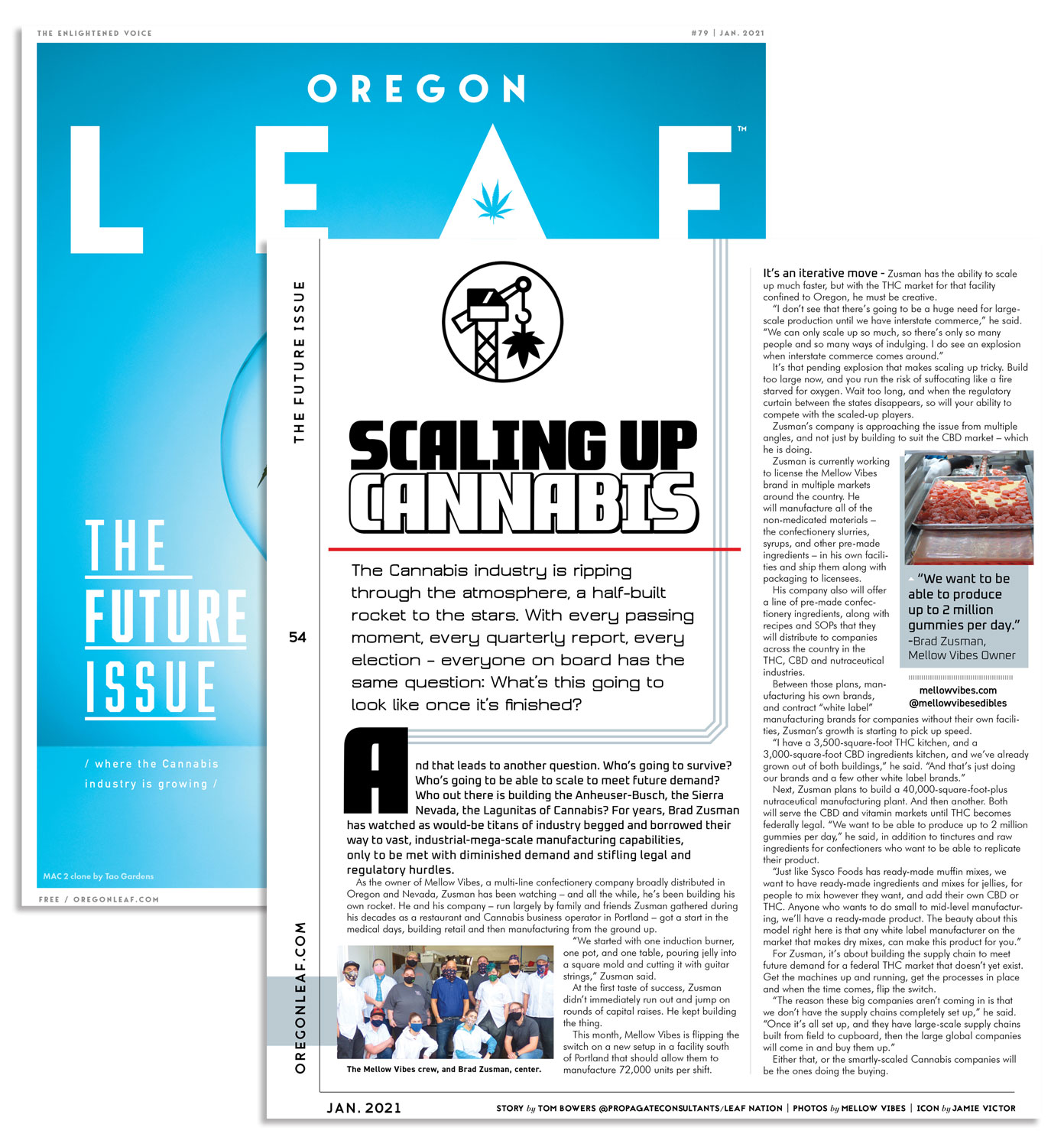 Text Of The Article From The Oregon Leaf

The Cannabis industry is ripping through the atmosphere, a half-built rocket to the stars. With every passing
moment, every quarterly report, every election – everyone on board has the same question: What’s this going to
look like once it’s finished?
And that leads to another question. Who’s going to survive? Who’s going to be able to scale to meet future demand? Who out there is building the Anheuser-Busch, the Sierra Nevada, the Lagunitas of Cannabis? For years, Brad Zusman has watched as would-be titans of industry begged and borrowed their way to vast, industrial-mega-scale manufacturing capabilities, only to be met with diminished demand and stifling legal and regulatory hurdles.
As the owner of Mellow Vibes, a multi-line confectionery company broadly distributed in Oregon and Nevada, Zusman has been watching – and all the while, he’s been building his own rocket. He and his company – run largely by family and friends Zusman gathered during his decades as a restaurant and Cannabis business operator in Portland – got a start in the medical days, building retail and then manufacturing from the ground up.
“We started with one induction burner, one pot, and one table, pouring jelly into a square mold and cutting it with guitar strings,” Zusman said.
At the first taste of success, Zusman didn’t immediately run out and jump on rounds of capital raises. He kept building the thing. This month, Mellow Vibes is flipping the switch on a new setup in a facility south of Portland that should allow them to manufacture 72,000 units per shift.
It’s an iterative move – Zusman has the ability to scale up much faster, but with the THC market for that facility confined to Oregon, he must be creative.
“I don’t see that there’s going to be a huge need for largescale production until we have interstate commerce,” he said. “We can only scale up so much, so there’s only so many people and so many ways of indulging. I do see an explosion when interstate commerce comes around.”
It’s that pending explosion that makes scaling up tricky. Build too large now, and you run the risk of suffocating like a fire starved for oxygen. Wait too long, and when the regulatory curtain between the states disappears, so will your ability to compete with the scaled-up players. Zusman’s company is approaching the issue from multiple angles, and not just by building to suit the CBD market – which he is doing.
Zusman is currently working to license the Mellow Vibes brand in multiple markets around the country. He will manufacture all of the non-medicated materials – the confectionery slurries, syrups, and other pre-made ingredients – in his own facilities and ship them along with packaging to licensees.
His company also will offer a line of pre-made confectionery ingredients, along with recipes and SOPs that they will distribute to companies across the country in the THC, CBD and nutraceutical industries.
Between those plans, manufacturing his own brands, and contract “white label” manufacturing brands for companies without their own facilities, Zusman’s growth is starting to pick up speed.
“I have a 3,500-square-foot THC kitchen, and a 3,000-square-foot CBD ingredients kitchen, and we’ve already grown out of both buildings,” he said. “And that’s just doing our brands and a few other white label brands.”
Next, Zusman plans to build a 40,000-square-foot-plus nutraceutical manufacturing plant. And then another. Both will serve the CBD and vitamin markets until THC becomes federally legal. “We want to be able to produce up to 2 million gummies per day,” he said, in addition to tinctures and raw ingredients for confectioners who want to be able to replicate their product.
“Just like Sysco Foods has ready-made muffin mixes, we want to have ready-made ingredients and mixes for jellies, for people to mix however they want, and add their own CBD or THC. Anyone who wants to do small to mid-level manufacturing, we’ll have a ready-made product. The beauty about this model right here is that any white label manufacturer on the market that makes dry mixes, can make this product for you.”
For Zusman, it’s about building the supply chain to meet future demand for a federal THC market that doesn’t yet exist. Get the machines up and running, get the processes in place and when the time comes, flip the switch.
“The reason these big companies aren’t coming in is that we don’t have the supply chains completely set up,” he said. “Once it’s all set up, and they have large-scale supply chains built from field to cupboard, then the large global companies will come in and buy them up.”
Either that, or the smartly-scaled Cannabis companies will be the ones doing the buying.