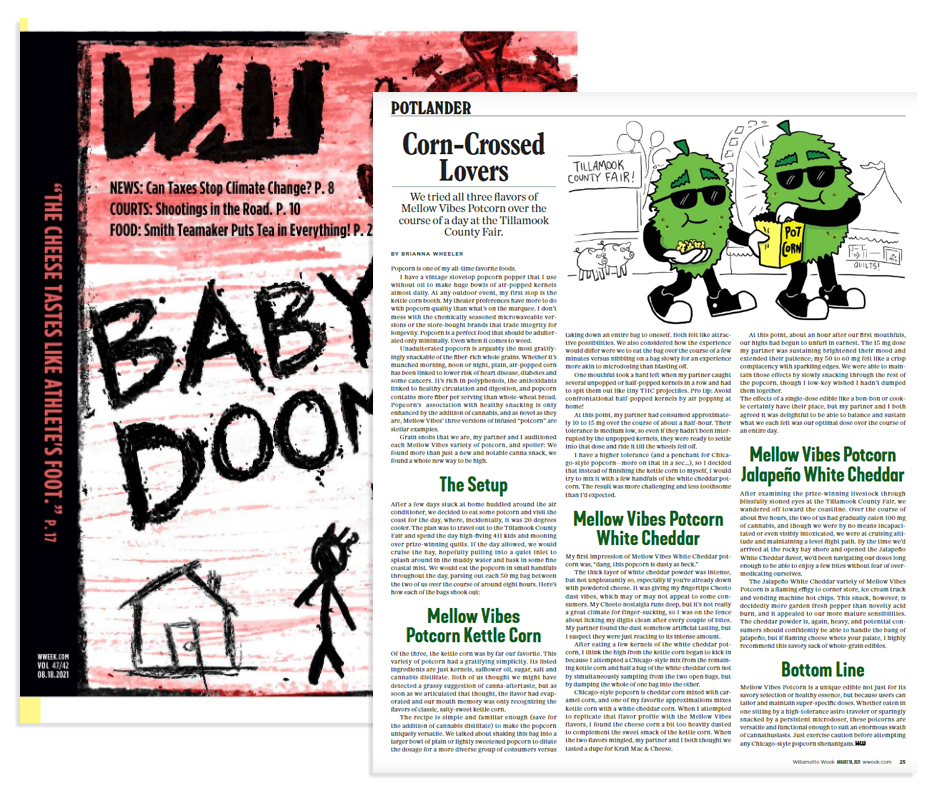 Text Of The Article From Willamette Week Potlander

Mellow Vibes Potcorn: Noshing on All Three Flavors at the Tillamook County Fair

Popcorn is a perfect food that should be adulterated only minimally. Even when it comes to weed. 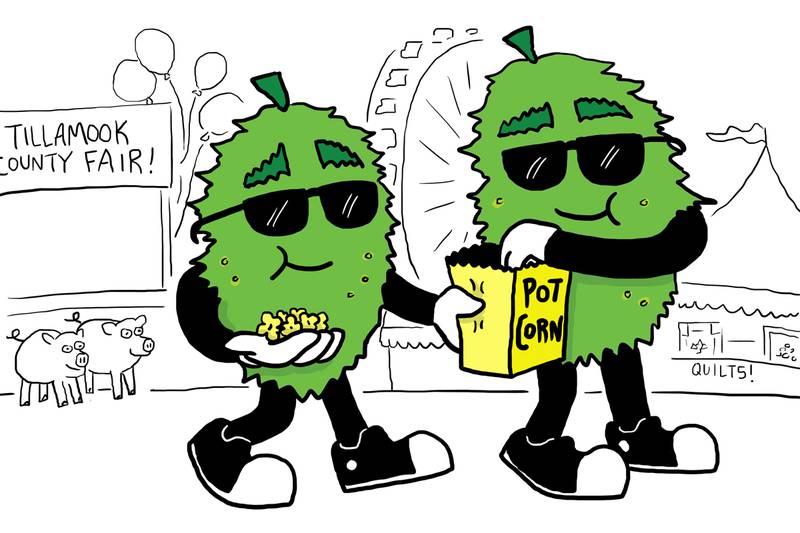 Popcorn is one of my all-time favorite foods.I have a vintage stovetop popcorn popper that I use without oil to make huge bowls of air-popped kernels almost daily. At any outdoor event, my first stop is the kettle corn booth. My theater preferences have more to do with popcorn quality than what’s on the marquee. I don’t mess with the chemically seasoned microwaveable versions or the store-bought brands that trade integrity for longevity. Popcorn is a perfect food that should be adulterated only minimally. Even when it comes to weed. Unadulterated popcorn is arguably the most gratifyingly snackable of the fiber-rich whole grains. Whether it’s munched morning, noon or night, plain, air-popped corn has been linked to lower risk of heart disease, diabetes and some cancers. It’s rich in polyphenols, the antioxidants linked to healthy circulation and digestion, and popcorn contains more fiber per serving than whole-wheat bread. Popcorn’s association with healthy snacking is only enhanced by the addition of cannabis, and as novel as they are, Mellow Vibes’ three versions of infused “potcorn” are stellar examples.

Grain snobs that we are, my partner and I auditioned each Mellow Vibes variety of potcorn, and spoiler: We found more than just a new and notable canna snack, we found a whole new way to be high.

After a few days stuck at home huddled around the air conditioner, we decided to eat some potcorn and visit the coast for the day, where, incidentally, it was 20 degrees cooler. The plan was to travel out to the Tillamook County Fair and spend the day high-fiving 4H kids and mooning over prize-winning quilts. If the day allowed, we would cruise the bay, hopefully pulling into a quiet inlet to splash around in the muddy water and bask in some fine coastal mist. We would eat the popcorn in small handfuls throughout the day, parsing out each 50 mg bag between the two of us over the course of around eight hours. Here’s how each of the bags shook out:

Of the three, the kettle corn was by far our favorite. This variety of potcorn had a gratifying simplicity. Its listed ingredients are just kernels, safflower oil, sugar, salt and cannabis distillate. Both of us thought we might have detected a grassy suggestion of canna-aftertaste, but as soon as we articulated that thought, the flavor had evaporated and our mouth memory was only recognizing the flavors of classic, salty-sweet kettle corn.

The recipe is simple and familiar enough (save for the addition of cannabis distillate) to make the popcorn uniquely versatile. We talked about shaking this bag into a larger bowl of plain or lightly sweetened popcorn to dilute the dosage for a more diverse group of consumers versus taking down an entire bag to oneself. Both felt like attractive possibilities. We also considered how the experience would differ were we to eat the bag over the course of a few minutes versus nibbling on a bag slowly for an experience more akin to microdosing than blasting off.

At this point, my partner had consumed approximately 10 to 15 mg over the course of about a half-hour. Their tolerance is medium low, so even if they hadn’t been interrupted by the unpopped kernels, they were ready to settle into that dose and ride it till the wheels fell off.

I have a higher tolerance (and a penchant for Chicago-style popcorn—more on that in a sec…), so I decided that instead of finishing the kettle corn to myself, I would try to mix it with a few handfuls of the white cheddar potcorn. The result was more challenging and less toothsome than I’d expected.

My first impression of Mellow Vibes White Cheddar potcorn was, “dang, this popcorn is dusty as heck.”

The thick layer of white cheddar powder was intense, but not unpleasantly so, especially if you’re already down with powdered cheese. It was giving my fingertips Cheeto dust vibes, which may or may not appeal to some consumers. My Cheeto nostalgia runs deep, but it’s not really a great climate for finger-sucking, so I was on the fence about licking my digits clean after every couple of bites. My partner found the dust somehow artificial tasting, but I suspect they were just reacting to its intense amount.

Chicago-style popcorn is cheddar corn mixed with caramel corn, and one of my favorite approximations mixes kettle corn with a white cheddar corn. When I attempted to replicate that flavor profile with the Mellow Vibes flavors, I found the cheese corn a bit too heavily dusted to complement the sweet smack of the kettle corn. When the two flavors mingled, my partner and I both thought we tasted a dupe for Kraft Mac & Cheese.

At this point, about an hour after our first mouthfuls, our highs had begun to unfurl in earnest. The 15 mg dose my partner was sustaining brightened their mood and extended their patience; my 50 to 60 mg felt like a crisp complacency with sparkling edges. We were able to maintain those effects by slowly snacking through the rest of the popcorn, though I low-key wished I hadn’t dumped them together.

The effects of a single-dose edible like a bon-bon or cookie certainly have their place, but my partner and I both agreed it was delightful to be able to balance and sustain what we each felt was our optimal dose over the course of an entire day.

After examining the prize-winning livestock through blissfully stoned eyes at the Tillamook County Fair, we wandered off toward the coastline. Over the course of about five hours, the two of us had gradually eaten 100 mg of cannabis, and though we were by no means incapacitated or even visibly intoxicated, we were at cruising altitude and maintaining a level flight path. By the time we’d arrived at the rocky bay shore and opened the Jalapeño White Cheddar flavor, we’d been navigating our doses long enough to be able to enjoy a few bites without fear of overmedicating ourselves.

The Jalapeño White Cheddar variety of Mellow Vibes Potcorn is a flaming effigy to corner store, ice cream truck and vending machine hot chips. This snack, however, is decidedly more garden fresh pepper than novelty acid burn, and it appealed to our more mature sensibilities. The cheddar powder is, again, heavy, and potential consumers should confidently be able to handle the bang of jalapeño, but if flaming cheese whets your palate, I highly recommend this savory sack of whole-grain edibles.

Mellow Vibes Potcorn is a unique edible not just for its savory selection or healthy essence, but because users can tailor and maintain super-specific doses. Whether eaten in one sitting by a high-tolerance astro traveler or sparingly snacked by a persistent microdoser, these potcorns are versatile and functional enough to suit an enormous swath of cannathusiasts. Just exercise caution before attempting any Chicago-style popcorn shenanigans.

Author: Brianna Wheeler is an essayist, illustrator, biological woman/psychological bruh holding it down in NE Portland. Equal parts black and proud and white and awkward.